Back in January 2019, Reddit user beefy_cabbage posted this image on Reddit's /r/me_irl subreddit. 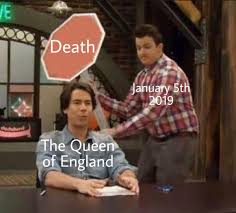 It was a prediction that the Queen of England would die on January 5th, 2019. Then a lot more Reddit users posted memes about the Queen's death or about how beefy_cabbage would probably be arrested. A lot of commenters argued that the meme implied a threat, while others claimed that it was obviously just a joke. Still others claimed that predictions couldn't possibly be a threat, and that's simply not true. Actually what beefy_cabbage created could definitely imply a threat: a market for the assassination of the Queen of England.

Death markets take more forms than Bell's version. His idea was informed by "dead pools," where people bet on when someone such as a celebrity will die. These dead pools function more like regular betting pools. Bets are made and if you guess the correct date the celebrity dies, you collect the money. They have existed online in various places for a long time. According to the Wikipedia entry on dead pools, Rotten.com (a now-defunct, rather grody website known for its alarming content, but which also had an amazing section of essays on pop culture, politics, and history called the Rotten Library operated the largest celebrity dead pool in the world. Macabre websites run these dead pools as just a bit of dark "fun." It isn't implied that any entity will act on any of the bets. You would assume that you would need a system like Bell's to make the leap from simple betting to assassination.

Maybe not if there is a motivating factor beyond money. What if there was an assassination market that didn't need money at all? An assassination market that didn't even need the cryptography or the anonymity necessary to power Jim Bell's proposed system? I think an assassination market based on accrued fame could function the same way. Replace actual money with likes, subscribes, karma, or whatever social media currency we are interested in. A lack of anonymity would be preferred to truly collect your fame, and so could be implemented as easily as the simple dead pools that we've seen. Someone posts a meme predicting someone else's death. Another entity kills that person on the correct date and gains all the likes or karma or whatever.

It isn't a new observation that people will do just about anything for likes. Even though people don't do just about anything for likes, and those kind of observations are usually made by disaffected cranks that just want to deflate everyone's fun (not me of course...). The difference in this incident was how closely it resembled assassination politics, which is pretty funny. Beefy_cabbage's meme was a joke, and I think that is pretty obvious because Queen is still alive. But it is close enough to some sort of system for a new kind of assassination market that I think we should take care. Once we meme ourselves into dystopia, I'm not sure it will be as funny. Or maybe it will be even funnier. I can't tell anymore.